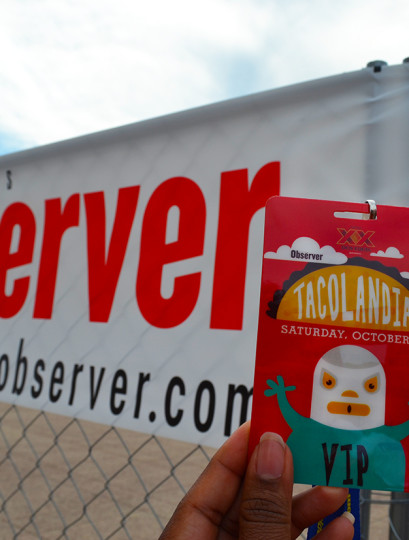 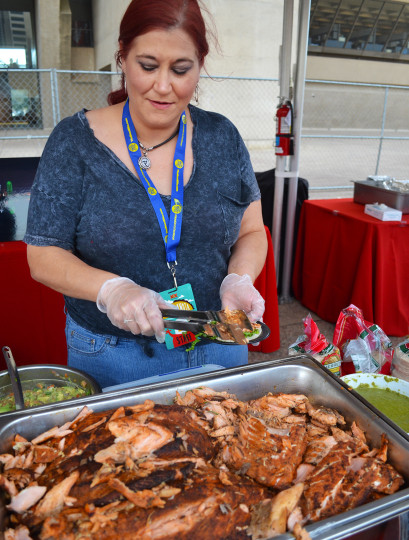 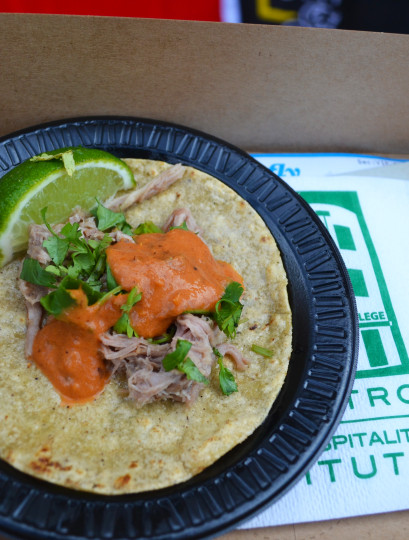 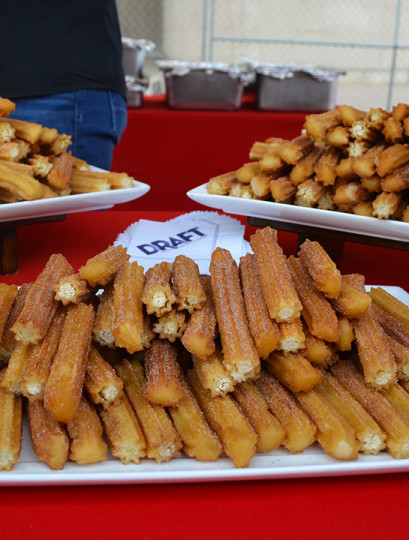 Not a huge fan of the churros. 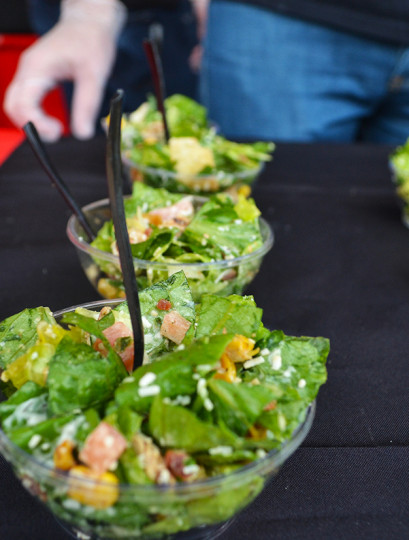 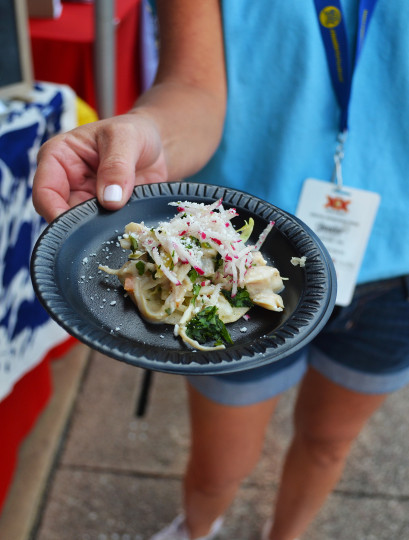 I enjoyed the island chicken taco at C’Viche. 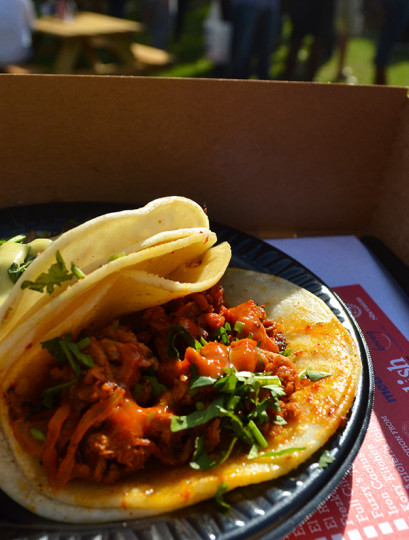 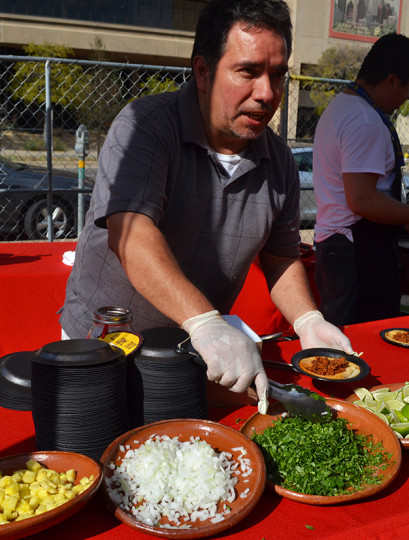 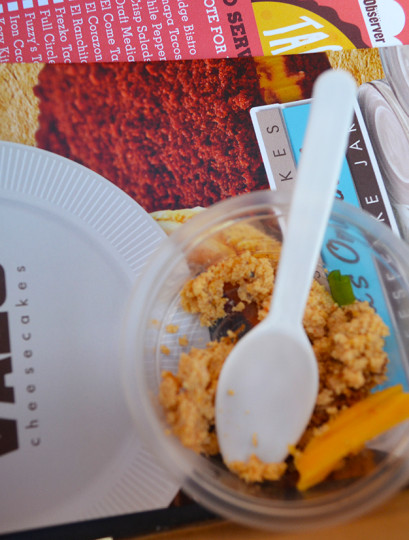 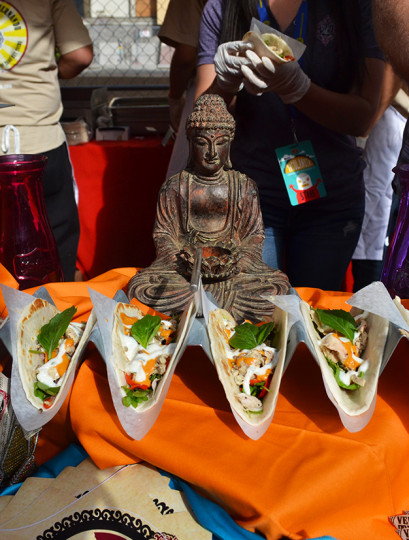 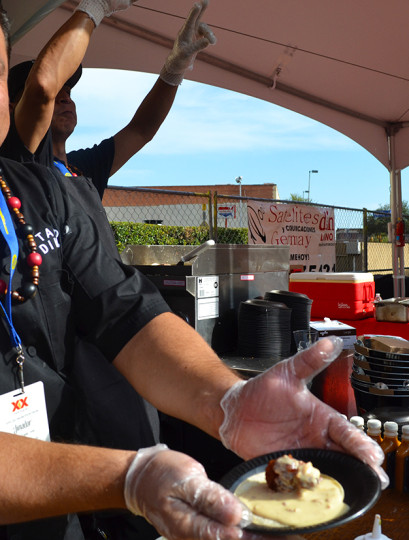 And the winner was…the chicken and waffle taco from Taco Dinner. Just look at it! 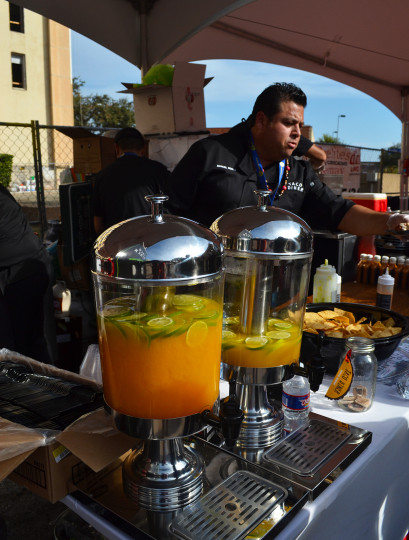 Taco Diner also brought along some of their famous mango water. I love that stuff. 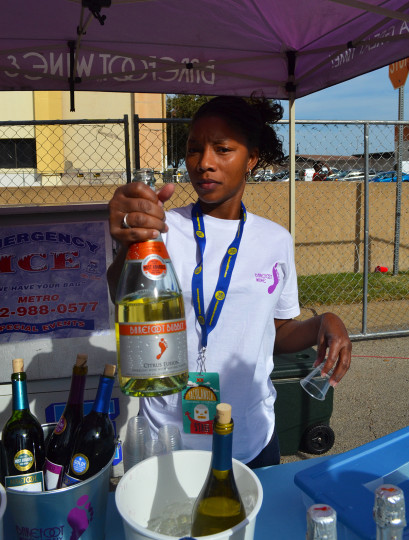 A bit of sweetness from Barefoot Wine. 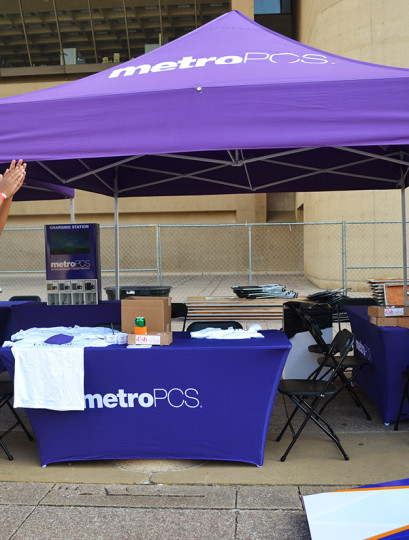 Playing for a tee at the Metro PCS booth. 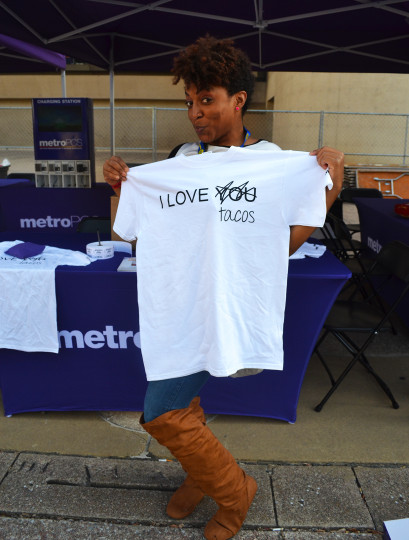 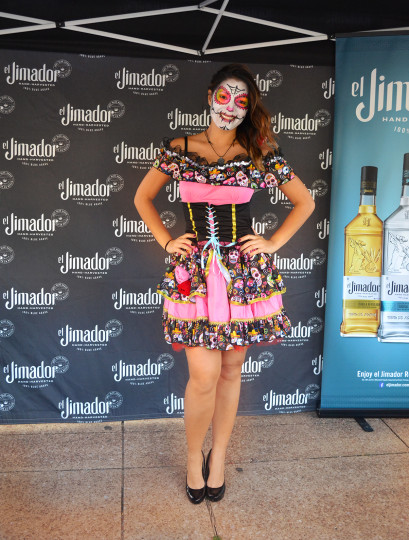 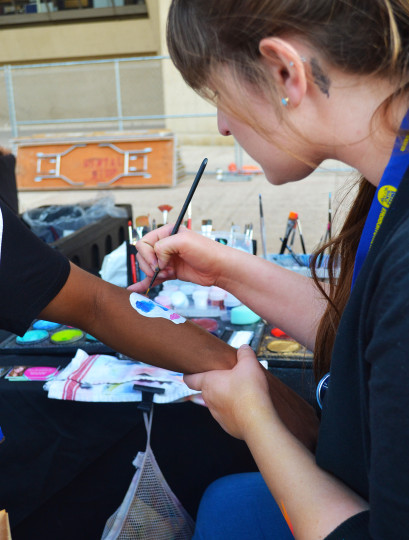 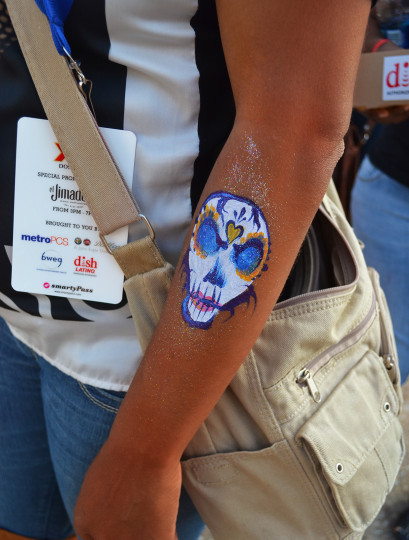 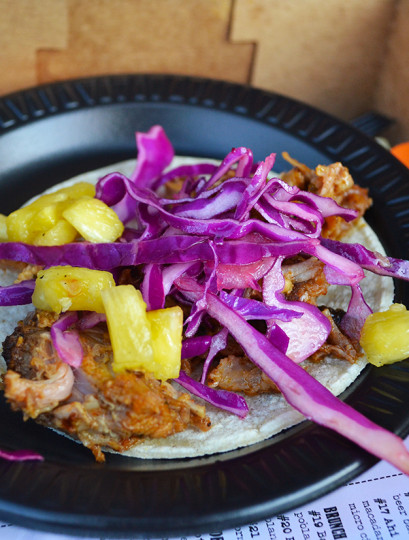 A little bit of lovin from one of my personal favorite taco spots in Dallas, Le Taco. 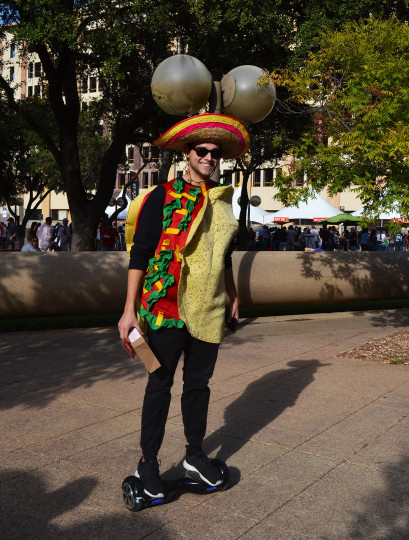 A fella committed to the taco cause. 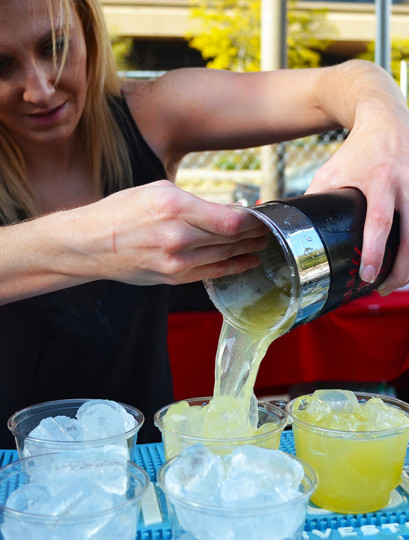 Fixing up a few great cocktails at the bar. 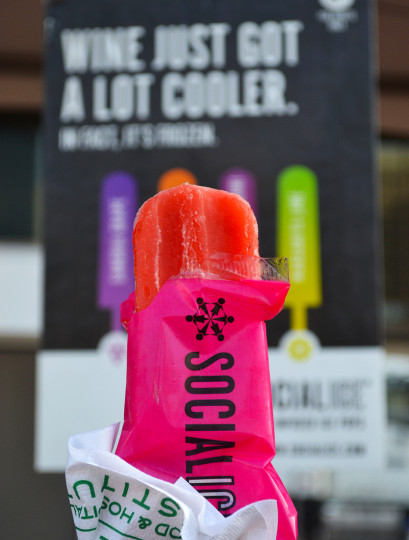 Social Ice brought along their boozy pops. The strawberry daiquiri one did not disappoint. 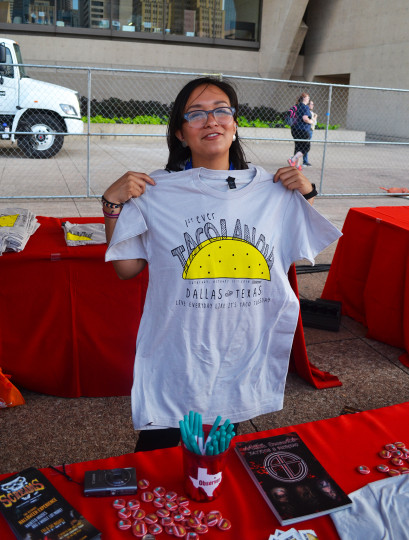 One of the cool kids at the Dallas Observer Table holding an awesome Tacolandia Tee. 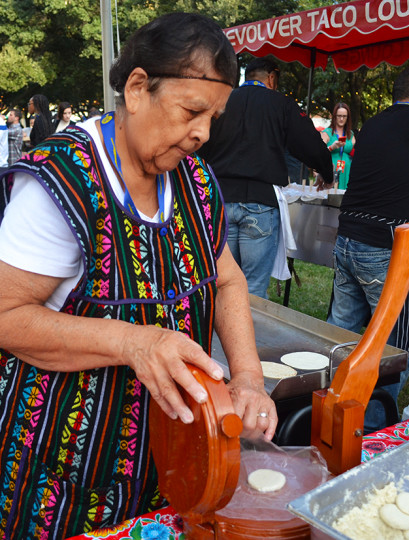 No smiles here, she was all about the business at hand of making tortillas. 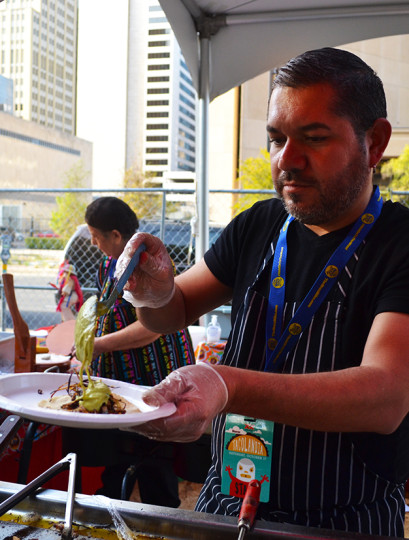 Adding sauce to one of my favorite, the octopus taco at Revolver Taco Lounge. 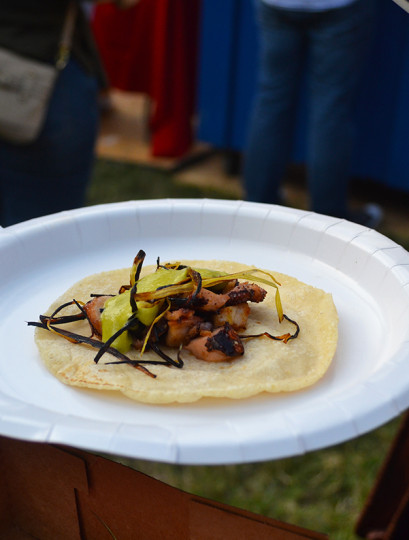 A closeup of the octopus taco.

Anytime a person even considers eating tacos in Texas I think everyone in the state breaks out into collective hunger pangs and cravings. So, it should come as no surprise that the first annual Tacolandia event hosted by the Dallas Observer was packed to the shell with taco lovers.

Held at City Hall Plaza, taco addicted people came out by the dozens to enjoy the all you can eat extravaganza. Some vendors stuck to the classic street taco with corn tortillas filled with barbacoa or pork, pairing it with fresh onions, cilantro, and salsa. El Come Taco kicked the classic up a bit, adding fresh pineapple to their flavorful pork tacos, while Bridge Bistro went  the way of the fish with their salmon taco topped with a corn medley. Although it was not enjoyed by everyone, the Island Chicken Taco from C’VICHE  peaked my tastebuds, with a peppery, creamy texture and sweetness. However, it was the grilled octopus taco from Revolver Taco Lounge that showed me just how much I appreciated that sea creature. To top it off, Revolver was cranking out fresh made tortillas on site, from a little lady who was about the tortilla making business at hand. The octopus had almost a smoky crisp flavor and was undoubtedly one of my favorite shelled item of the afternoon.

But as far as the bees knees, cat’s pajamas and all around wow factor, I’ll have to say the chicken an waffle taco from Taco Diner took the cake. How could it not? Fried chicken is southern, put that in a taco with a sweet, almost buttery sauce then you’re immediately winning. I wasn’t alone in this theory. Word spread fast about this thing, because after an hour or so of being at the event, Taco Diner easily had the longest line in the place. They also won the vote for best taco at Tacolandia.

Tacos are a wonderful thing, but they are even better with booze. During the event, guests got a chance to sip on cans of Dos Equis, Mike’s Harder Lemonade, and try samples of El Jimador Tequila and Barefoot Wine. Those looking to wet their whistle with something a little harder could enjoy special tequila inspired cocktails.

With plenty of fun games, great weather, good tacos, good booze, and an extra banging DJ, I’d say the first annual Tacolandia event was a success. When it comes to all you can eat tacos, and chicken and a chicken and waffle taco being one of the options, it’s kind of expected that this affair was kind of a big deal. TXmb