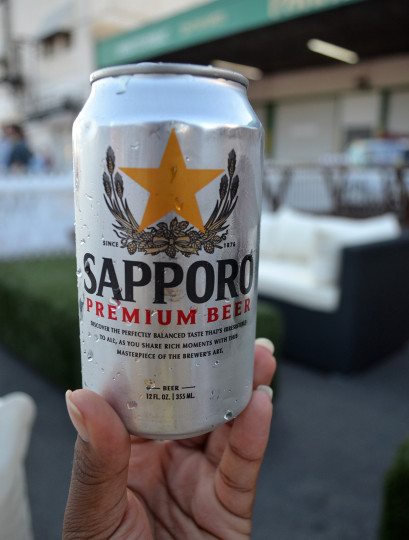 The Sapporo Premium Beer was the begining of the brew tasting. It was quite enjoyable and the perfect light taste to start the evening. 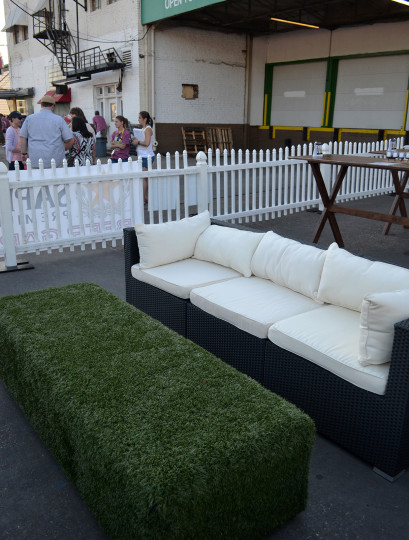 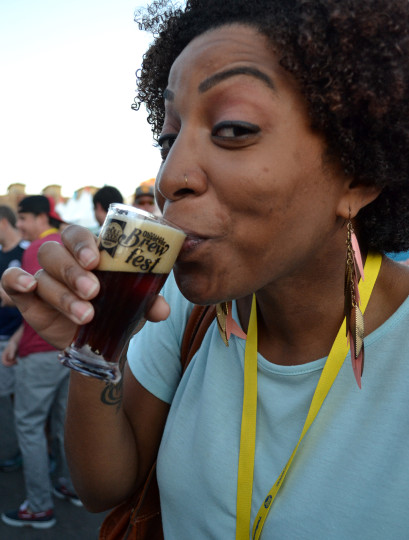 Getting her first taste of the Peticolas classic, Great Scot! 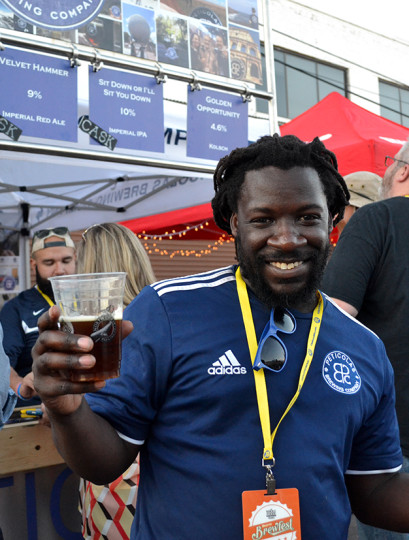 Legendary beer lover, creator and connoisseur, Jarrod Asberry was out and about supporting Peticolas Brewing. 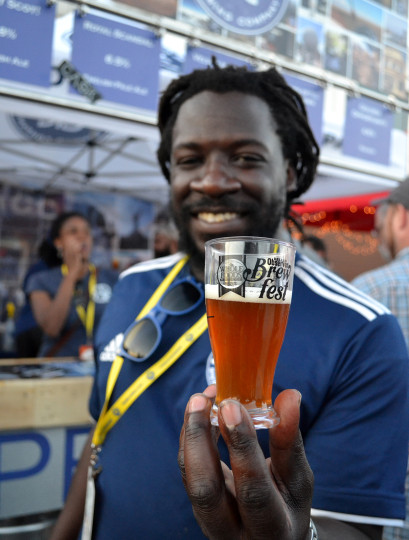 Mr. Asberry handing me a sample of Peticola’s, Sit Down or I’ll Sit You Down. 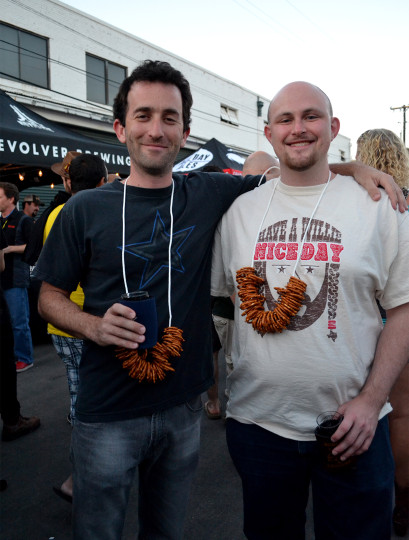 Pretzel necklaces were back in full effect this year! T 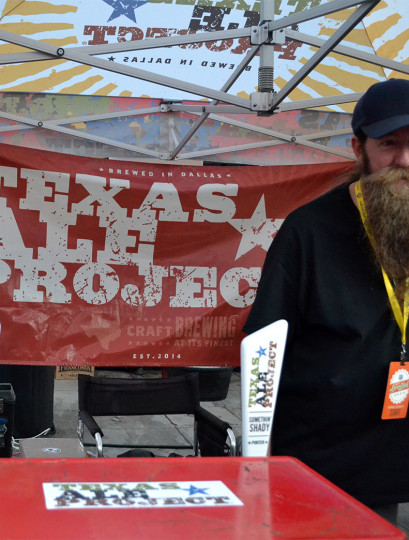 Texas Ale Project was out with a couple of their brews. 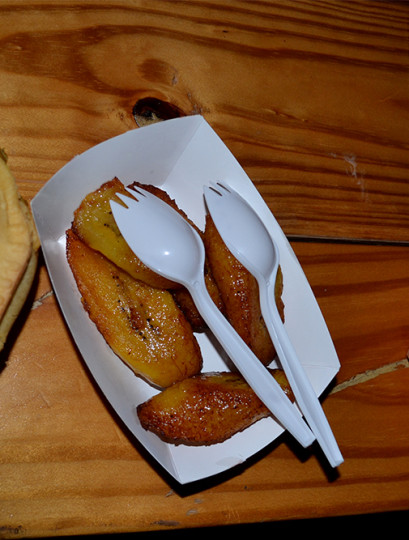 We partook in a little grubbage from the Island Spot, including two chicken patties, plantains and jerk chicken nachos. 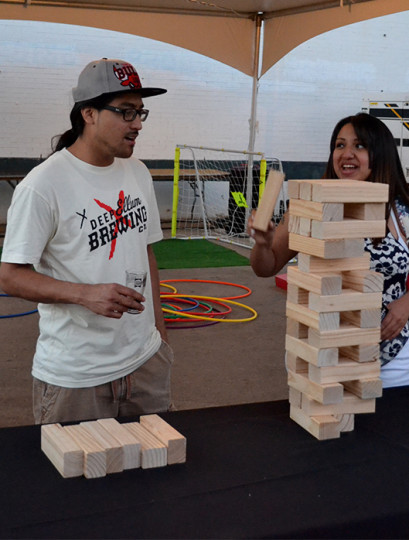 This year Brewfest kept things extra interesting with a game center, complete with big Jenga, Connect and even table football! 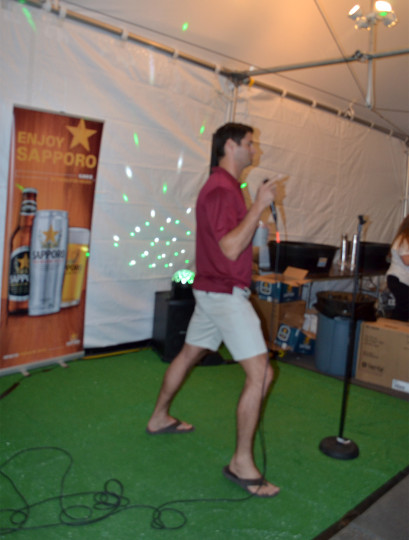 This fine fellar decided to flex his vocal stylings during karokee. He was one of many epic singers of the evening. 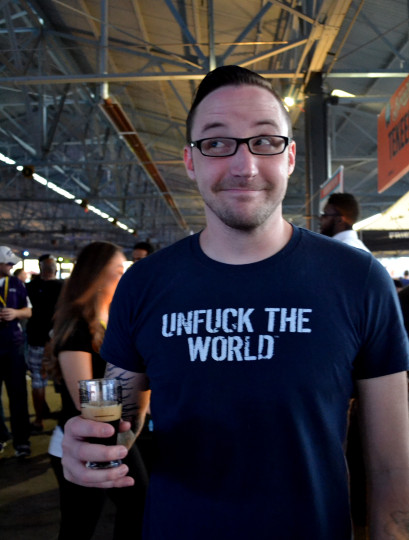 Crafty fellow in a clever shirt enjoying his brew and smirking. 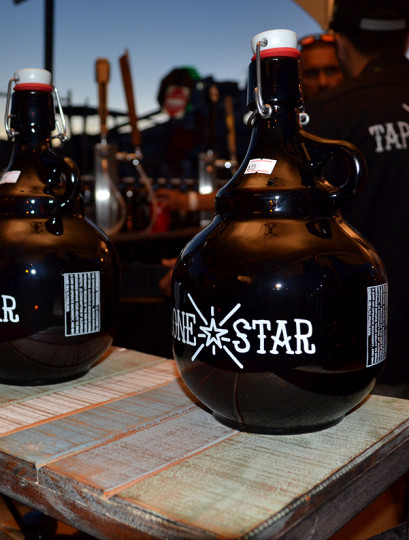 A few of the good looking growlers being sold. 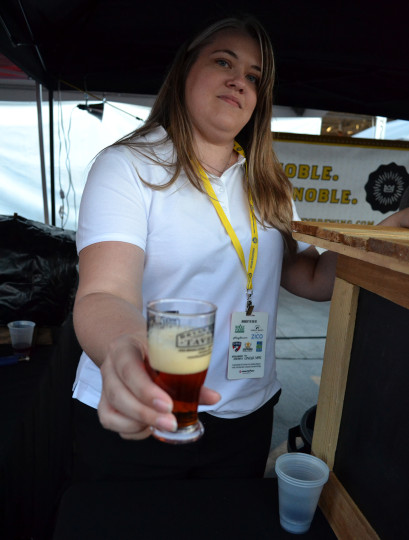 The newly released Ft. Worth brewery Noble Rey. I really enjoyed the subtle goodness of the Strawberry Blackberry beer. 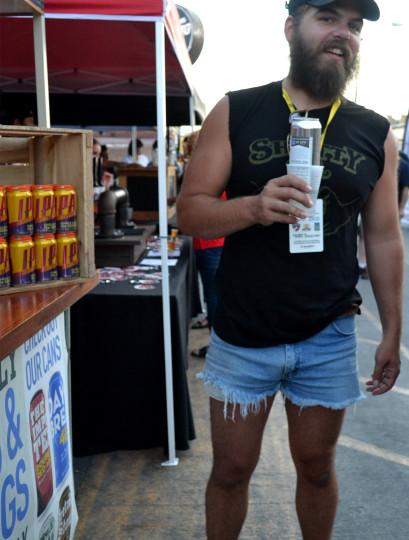 The man who loved his shorts and also beer.

What happens when you bring great beer, karaoke, games and extra hype music together? Likely an all-around buzzed up drunken good time and plenty of smiling faces. For the fifth year in a row, BrewFest did not disappoint. They kept the good times going and plenty of suds flowing as event goers made their way through tons of beers under The Shed in Dallas Farmer’s Market. This year, there were plenty of winners.

My top favorites go to most of the local breweries like the extra strong, Sit Down or I’ll Sit You Down from Peticolas Brewing. Community left me in anticipation mode for the upcoming State Fair of Texas with their Funnel Cake Beer, while Tupps Brewery had one of the most unexpected dark beers that has ever graced my lips. Although it was the color of midnight, their Black Ale was light on the palate, yet beautifully rich with notes of chocolate and coffee. Another favorite and absolutely taste boggling beer was the Salty Lady  from Martin House Brewing Company. It fully intrigued my taste buds, as it exploded with light, briny and sour flavor yet still remaining under the radar of tasting odd. Other favorites included Sapporo, and Texas Ale Project’s ,Fire Ant Funeral.

During the partaking of so many brews, it makes sense that you might become a little famished. Some of this year’s grubbage choices included Samson’s Gourmet Hot Dogs, Bombay Chop Stix and The Island Spot. After enjoying the Salty Lady, it only made sense to pair the puckering flavor with softly fried sweet plantains from The Island Spot. The chicken patties had the perfect amount of curry, but could have been stuffed a little more, while the jerk chicken nachos put a surprisingly delicious twist on chips with cheese.

As the night wound down, in traditional BrewFest fashion, people shook what their mother’s gave them. Some grinded, others shimmied in place. For those who wanted to keep the BrewFest gathering going, they made their way to The Ginger Man in Uptown for the official after party. All in all BrewFest 2015 was an evening of hoppiness. TXmB